Beginning in 1954, our parish has a rich history of blessing, sacrifice and growth. We feel incredibly humbled to be such an integral part of the Andover, KS community. 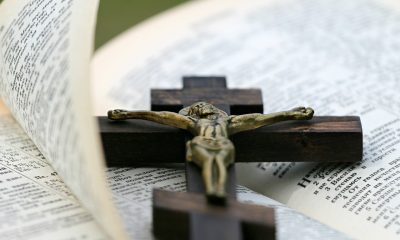 Our community was established by eleven Catholic families in the area who were concerned about the religious education of their children. Some were traveling 45 miles round trip for catechism classes in Augusta.

On October 10, Fr. John Curran presided at the first Mass hosted in the home of Clarence and Isadel Seimer. Harold and Rita Becker and Ralph and Margaret Overman offered their homes for catechism classes. Sr. Thomansine and Sr. Justin conducted the classes.

In December, arrangements were made with Mr. Leonard Stoltz who offered a cabin at Shady Rest Resort for use as a chapel. Members furnished it and Msgr. Leon McNeil, the pastor at St. James parish in Augusta, presided at the first Mass there on Christmas eve. By this time there were 35 families in the mission community. 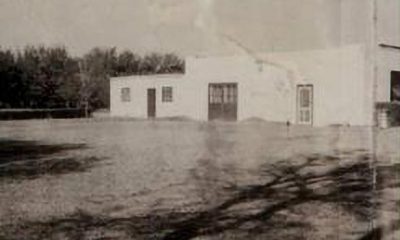 The members of our parish voted to determine our patron saint. Bishop Mark Carroll had offered two choices: St. Vincent de Paul, patron of Charities, or St. Francis Xavier, patron of Catholic Missions. The community selected St. Vincent de Paul. (That may have been in part because there was already a St. Francis Xavier parish in our diocese at Cherryvale.) Bishop Carroll established the parish in June ’55 and Father Justin Betzen was named as the first pastor of the parish.

The small community was growing and looked for a more permanent home. In September 1955 the parish obtained a one-time Sinclair pump station located on Four-Mile Creek, and so the community moved again. One section of the converted pump station served as a worship area, another became the social hall, and a third section was set aside for the pastor‘s quarters. A common kitchen served the needs of the social hall and the pastor. One section of the exterior had to be repainted regularly because the dark green “Sinclair” sign kept bleeding through. By December 1955, the parish had 85 families. Growth continued through the late ’50s, forcing the community to adapt. The social hall and worship areas were traded in an effort to keep pace.

Fr. Denis Dougherty was pastor when Four-Mile Creek flooded three times in 1958. In each instance, parishioners came to the rescue. New ministries of “shoveling mud” and “hosing off furnishings” were established. Fr. Dougherty lived in continual fear of rain

Parishioners began to talk about the need to move again. A building committee began to work on plans for a permanent – and dry – location. By November of 1959, the parish raised $40,000 for a new home. Plans were drawn and construction began. In addition to the worship space, the new building would house a social hall, kitchen, and classroom areas. 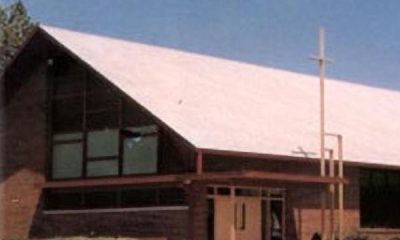 On Christmas eve, 1960, the parish assembled for Midnight Mass, the first celebration in the new building. Bishop Mark K. Carroll dedicated the church on January 8, 1961. In his remarks that day he praised the pioneer spirit of the community saying that “the heart of this beautiful church is its people—the colorful story of the Catholic pioneers of this area—the humble beginnings of a parish in an abandoned garage… .”

Through the efforts of Fr. Edward Steinberger, who was appointed pastor in August ‘61, a house as donated to the parish to be used as a rectory (priest’s residence). The parish paid one dollar for the house cost plus the $6,000 cost of moving it. Frs. William Ryann, Neil Driver, and Joseph Gerstenkorn served the parish as pastors during this decade. Fr. Gerstenkorn oversaw the remodeling of the rectory. 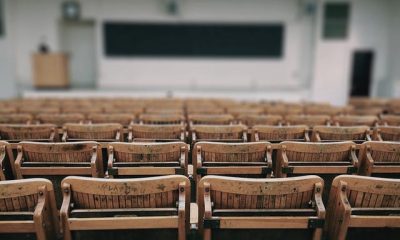 The parish “burned the mortgage” for the new facilities on December 15, 1973. Fr. Charles Regan, the pastor from July ’69 to May ’79, provided leadership for more buildings. Parishioners expressed the need to reach out to the youth population. Classrooms, restrooms and a gym/social hall were added. Bishop Leo C. Byrne dedicated the new space on July 9, 1978. The parish experienced steady growth during this period. Fr. Robert Watson was pastor from June 1979 to October of 1980. 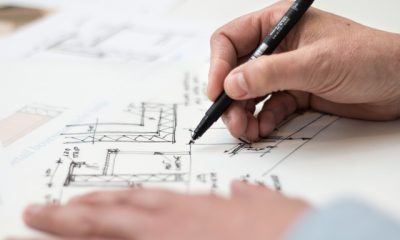 Fr. James Eatough served as pastor from October ’80 to June ‘85. Under his guidance Marriage Encounter and Parish Renewal flourished. Fr. Eatough began planning for expansion to meet continued growth. When Msgr. Herbert Hertel arrived at the parish in 1985, a third Mass was added on Sunday morning. It was becoming apparent that the parish was outgrowing its facilities. He established a building fund in 1986 and challenged parish leadership to plan for the future.

That evaluation and planning process continued under the guidance of Fr. Mike Baldwin who became pastor in March ‘87. The Pastoral Council developed a Mission Statement to guide all aspects of parish life. Architectural plans were drawn for additions and revisions to the parish plant. The congregation moved into the gym for worship in the late fall of 1990. Construction began on a new rectory, making way for a worship space addition. This major addition was to connect with the south end of the existing complex. The original worship space would then be converted to a social room and offices. 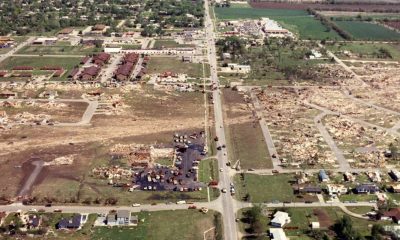 On Friday evening, April 26, a massive tornado cut a one-mile-wide swath through Andover. Over 80 parishioners lost their homes. Two members of the parish family, Kathy Sargent, and baby Malone were killed. The tornado destroyed all existing parish facilities. Numbed parishioners rallied to console the grieving and assist those with losses.

Within a week, workmen had cleared out most of the tornado debris, but it would take 2 years for a new building to rise from the rubble.

A two-year workout began the following week — hauling everything for weekend Masses to the Andover High School Auditorium. When the parish gathered for worship the second Sunday after the storm, the words of the opening hymn were “All shall be well…” Many wondered if that could be true.

Thanks to the courtesy of Leon Trammell, a Parish office was set up in the Plaza Shopping Center. Daily Mass and nighttime meetings were held there as well. The Andover Methodist Church, Hope Community Church, and many parishioners opened their doors for choir practice, special services, and religious education classes. Building and Fundraising Committees reconvened and the process of planning for a larger parish facility began. Groundbreaking took place in October.

Fr. Ken Melarango joined the Pastoral Staff from 1991 to 1993. His special gift was providing enriching classes in Church History. 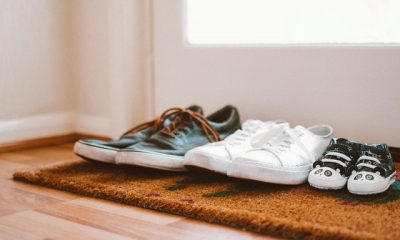 During this time without a building, parishioners learned to treasure Bishop Carroll’s dedication words for the church. He said: “the heart of this beautiful church is its people,” not the physical buildings. Living this awareness kept things on course. Growth in numbers of families and programs continued. Meanwhile, anxious eyes focused on the new building. Concrete, steel, then brick and mortar came together to form a new parish home. 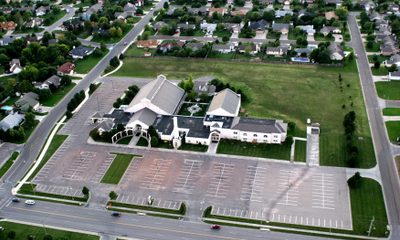 The Mass of the Lord’s Supper, Holy Thursday ‘93, was the first worship service in the new complex. That Easter weekend marked a special resurrection for the parish.

Sadly, the week following Easter, parishioners joined together in their new home to celebrate the funeral Mass for Fr. Ken, who had died on Easter Sunday.

Bishop Eugene J. Gerber dedicated the new church complex on May 2, 1993. His special gift to the community was a relic of St. Vincent de Paul from his bishop’s cross. The parish had grown to 600 families.

Vacation Bible School and Summer School of Religion sessions broke in the new classrooms in the summer of 1993. Parishioners and the Pastoral Staff went about the task of making the new physical plant “home”. Statues of Mary & St. Joseph salvaged from the destroyed church were mounted at the doors to the Daily Chapel. The headless statue of St. Vincent de Paul took up residence in the courtyard. (After its repair one parishioner remarked: “It’s St. Vincent de Paul? I thought it was St. John the Baptist!”) Parish offices buzzed with activity as parish growth mirrored that of Andover and the surrounding area. 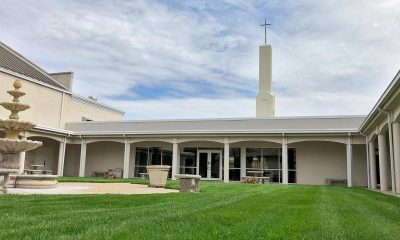 After moving into the new complex, the number of families in the parish has almost doubled in the next 6 years. The parish continues to draw strength from its past in order to deal with the present and prepare for the future.

Water and wind have wrecked buildings but strengthened commitment. The community has been built on the rock of faith, not bricks and mortar. With God’s help, our parish family will continue to proclaim the gospel and point the way to God’s kingdom.

Resurrection from the tornado happened in the community in a variety of powerful, spiritual experiences. For many, though, the parish plant is a visible symbol of hope: from the midst of suffering and loss, new life can spring forth. 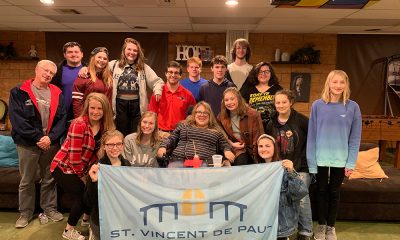 The parish continued to grow and added dynamic ministries of LIFE to provide faith formation for the whole family and LIFE TEEN ministries for the youth. 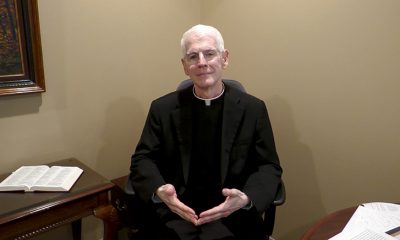 This year marked a time of transition as Fr. Mike Baldwin moved after 24 years as the pastor in which he led the parish from being a small country parish to a large suburban parish with a special identity as a place of hospitality, celebration and service within and beyond the parish boundaries. Fr. Kent Hemberger became our new pastor and continued the special spirit and ministry of St. Vincent de Paul Parish. 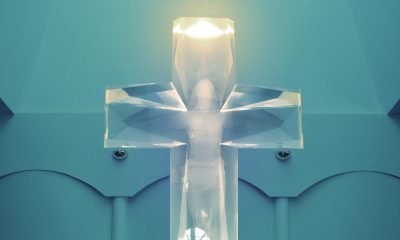 In May of 2020, it was with great sadness that our parish learned from Fr. Kent that he had been diagnosed with an aggressive form of pancreatic cancer. He passed away on July 22, 2020. We will remember always his gentle spirit, devotion to Ignatian spirituality and love for his parishioners.

To help ease our suffering of such a great loss, Bishop Carl Kemme asked our former pastor, Fr. Mike Baldwin to assist as administrator for the time being. Fr. Mike also serves as one of the leaders in our diocesan seminary, the St. Joseph House of Formation. Also helping with celebrating daily Masses is Fr. Pat Malone, one of our beloved retired priests.

Our history continues as we “Grow in Christ and Build God’s Kingdom.” We are a unique, compassionate Catholic community, open to all who enter our doors. We are real people of faith. Our compassion drives us to show God’s mercy to all who surround us.